Is iPad 2 the future of mobile telepresence? 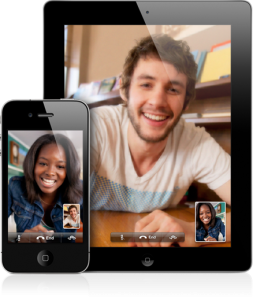 With yesterday’s announcement of the iPad 2 with front and rear facing cameras, the world may have stepped that one step forward into making mobile telepresence or mobile video conferencing a commonplace for business and consumers.

But waitaminute, didn’t iPhone 4 offer this a year ago? And they launched the Facetime for Mac recently as well. Why would the iPad 2 make such a wave?

Well, watching the market for mobile telepresence (and please note, we are not talking about remote presence), you can see the various pieces of kit that are currently being offered for ease of use and mobile video conferencing. From the Cisco Cuis to the various video chat software apps on mobile phones (like the qik app for the htc phones), the idea of talking into a device that acts as a portal to another physical location is going to become more and more commonplace.

iPad above the pilot's camera which results in overlooking the pilot

As we saw with the iRobot AVA, the iPad could be an excellent interface for the “head” of a telepresence robot, but the coding and resolution of this device would take time to work out (e.g., what is the focal length, could you zoom, what about low-light conditions).

But I can easily see some quick efforts that allow someone to hook up an iPad with the iRobot Create (like I saw from a CMU-Silicon Valley student) and make a desktop/conference table robotic telepresence which will allow an individual to manage the direction an iPad is looking. Granted, this is a more expensive motorized camera mount and an LED screen, but I believe that as people get more and more familiar with face-to-face or “portal creating” from these devices, the adoption of RPSes will be much faster than others perceive.