Earlier this week, I spent an hour speaking with Jeremy Parsons, co-founder of Mantaro Engineering Product Development Services and the visionary behind the MantaroBot. Jeremy spent a good deal of time with me discussing his history, his first attempt at telepresence robots and how the MantaroBot came to being this year. 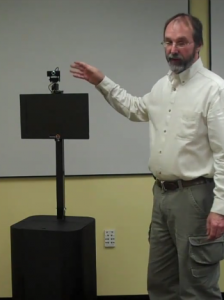 He is proud of his product!

Jeremy’s background starts at the University of Maryland where he was a Technology Management graduate who spent a great deal of time at Telecommunications Techniques Corporation, (now JDSU) primarily focusing on telecommunications test equipment. It was during his 14 years at TTC that he met his future business partner, Gabriel Mayo. In 1995, the two of them spun out of TTC and formed Synatpyx Corporation as a bespoke engineering firm for the telcommunications industry. As many entrepreneurs before them, Gabriel and Jeremy began to see product opportunities as they worked with their clients. One of these products became a best selling product that drew the attention of Telco Systems which subsequently acquired their company. After two years, the parent company began to cost-reduce and shut down the Synaptyx office which caused Jeremy and Gabriel got to start again.

Jeremy told me that the MantaroBot we see today is not the first of its kind. Twenty years ago, Jeremy was already thinking about building a robotic telepresence, but the the technology at the time was far too cumbersome to achieve what he had envisioned for robotic telepresence.

In early 2000, Jeremy saw the first glimmer of what could help create a consumer-based product. Watching the proliferation of Instant Messenger clients like AOL and Yahoo! which began offering both voice and video on their clients, he thought “Could this support the audio/video we need?”

With credit card in-hand, Jeremy bought a robot “kit” from Zagros Robotics and created his first telepresence robot using the Yahoo IM client as the communication channel. To handle the control channel (e.g., drive commands) he used Microsoft’s NetMeeting offering to achieve as real-time control as he could. Unfortunately, he discovered that these technologies were still not effective and he mothballed the effort.

As he continued serving his clients, he kept an eye out for opportunities and began to notice the excitement that was beginning to build around robotic telepresence. Last summer, one of the interns Austin Duff happened to be a robotics enthusiast and Jeremy pulled him aside and showed him his first attempt at building the MantaroBot. He gave Austin the summer to come up with a solution – and within a week, a Frankenstein-ian monstrosity of wires, screen and camera was demonstrated using Skype for video and audio and a web server on the MantaroBot to handle control.

Over the rest of the summer Austin improved and refined the robot. One of the key innovations that was developed in this period was instead of using a web server to handle the control commands, Austin figured out that the application to application interface offered by the Skype client could easily handle the control needs for the MantaroBot. So today, the system only needs Skype for the communication for both the users and the RPS. Happy with his interns efforts, Jeremy and the team at Mantaro reworked the system into the slimmer design you see today

Makeup of the MantaroBot

As Jeremy and I spoke, it became obvious that the engineering principles of “waste not, want not” were applied in the build of MantaroBot. Instead of building everything custom, most of the components of the MantaroBot are primarily off-the-shelf components ranging from the ASIS Netbook supporting the communication channel and controls to the 14″ LCD screen and a FastTalk webcam atop the device. The only custom electronics was a motor controller daughter board that handled the commands to the motors, the IR sensors that surround the base of the device as well as and battery control and monitoring.

From this video, you can see the makeup of the MantaroBot and I go into further discussion below:

The mobility of the MantaroBot is handled by two DC motors providing direct-drive to the front of the device, while the back support two omnidirectional 5 inch caster-based wheels. I asked about clearance for the MantaroBot and Jeremy said that the 6-inch wheels give the device a good 1 inch clearance which has easily overcome obstacles like pencils and cables. And the top speed of the MantaroBot – a brisk 1.4 mph. 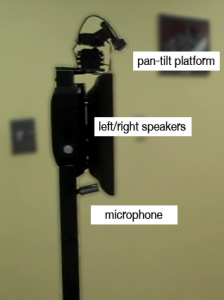 Video control on the MantaroBot was what I liked most about the system. The MantaroBot camera supports the standard 45 to 60 degree of viewing field, but the use of a pan-tilt platform allowed for easy motion along the angle of viewing (90 degrees from center on the left, right and down). Looking up topped out at 60 degrees – which was very similar to the VGo.

Due to my computer, the video resolution and audio delay was not overly impressive – the camera is rated at 640 by 480, but I was using an underpowered Wondows XP machine which gave me a video resolution never got above 320 by 240 with far too many artifacts. I will give a further debrief on the MantaroBot after I coalesce my thoughts. But a recent conversation with a Scottish engineer at the Mantaro offices was accomplished with nary a hitch.

Additional features include an adjustable neck or “mast” which could go up or down (manual adjustment) and a convenient height “hood” that allows access to the netbook which controls the device.

I asked Jeremy why he was going with off-the-shelf parts, and he gave me two very good points. First off, we discussed the direction people might take the remote presence systems. He believes fully that no matter how effective the technology becomes, there will always be a constructed feel to the device. And since the device is there to serve the needs of the pilot, the aesthetics are not as important as the pilot’s capability of being present in the room. In Jeremy’s words, “Utility far outweighs the aesthetic – robots are always going to look ugly to someone. And if not ugly, it will certainly look strange.”

That said, in order to make things affordable, it would be better to work with off-the-shelf components since these products are coming closer and closer to the specific needs for robotic telepresence, so why take on the overhead for creating everything custom.

Does it work – this “remote presence”?

When we spoke about the effectiveness of the MantaroBot, Jeremy got very passionate about the utility of these devices. He commented on his ability to simply pop into work, attend a meeting, catch up with team members and then pop-out and see his family. “Skype gives you a taste of what is possible – but it is not enough. A mobile telepresence system gives you a better opportunity for real engagement. No laptop will make that happen.” 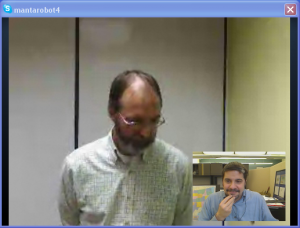 What do you think the future will hold?

We discussed how just by having the MantaroBot in the room of a meeting – it changes the dynamics of the room. When people are on the phone in a conference call, no one in the room can see where the caller is – and they become “out of sight, out of mind”. With robotic telepresence, people see and react to the physical presence that is in the room. Their body language changes. They speak to the presence. And the pilot can then track the social cues of who is speaking to whom.

After all of the press he got, I wondered how he was doing in terms of sales. While Jeremy would not be specific on numbers, he said they were receiving inquires on a daily basis and are expecting to begin shipping to their first customers later this month.

When I asked for the prophesies for the future, Jeremy was hesitant.

I, for one, am interested in seeing what happens next.