One day in August 2010, I sat at my desk at a coworking space in NYC’s SoHo neighborhood, straightened my blue blazer and crisp collared shirt – and took a look at myself on my webcam. I noted the lighting was not really good, so I set up a lamp behind my laptop’s screen. Still looking too red, I turned the screen of my MacBook Pro yellow – which returned a more natural color to my face as I used the Logitech C910 webcam.

With Skype running, I logged into Texai interface and selected the Texai I would be using. As the login process completed, I saw the Skype call come in and accepted it. After a few moments, I saw the two partners and my contact at a Palo Alto, California law firm and smiled as I introduced myself.

“Good morning gentlemen. I’m Sanford. Do you mind if I move a little closer to you? I can see you better that way.”

And with that introduction, I moved my remote presence system, the Texai, up to a large conference table a good 3000 miles away. The partners looked with surprise and amusement –- they heard they were going to see something new in telepresence, but seeing me rolling up to them in the Texai wasn’t what they expected. My contact who set up the meeting grinned from ear to ear.

Thirty minutes later, I took a brief tour of their office — me in the Texai, them beside me — and the partners were ready to become a member of our remote presence family.

Changing the Way We Work

My name is Sanford Dickert and I am a product manager/evangelist for technologies focusing on collaboration and team dynamics. But before I became a product manager, I was a graduate robotics engineer believing that robotics was a way to help people and change their lives for the better.

At the time, I dreamed of combining robotics, AI and human-factors design to create tools that would help connect and engage people in ways we had yet to discover. Unfortunately, at the time, robotics was relegated to manufacturing and pick-and-place systems — which was not where my passion was. In 1999, I left robotics for the excitement of dotcoms, politics, and teaching — in the pursuit of the way to make a difference.

In 2010, I got a chance to play again in robotics in a way that could change the future of how we work – by shifting where we work. And that future is remote presence.

What is Remote Presence?

I began asking myself this back in October 2009. I was chatting with my friend on the phone as I as I taxied home on a cold New York night. He told me that the first thing to do when I got home was to check out the URL he sent me in my inbox. 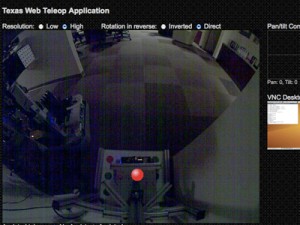 Drag the ball in the direction you want to go

I arrived home, clicked on the link, and saw an image of one of the labs at Willow Garage, a robotics research lab in Menlo Park, California with my friend playing at the computer. There was a form field needing my Skype username, and when I entered it a user called “Texas Robot” called me.

I accepted the video call and saw my friend looking directly at me, as I normally would in a Skype video call.

So, on the screen, I clicked on a red ball centered on the image on the web page that was covering the base of this ”thing”, and dragged it toward the top of the page. Suddenly, the room was moving – no, wait, it was the camera that was moving. I was moving toward him while I was seeing him through the picture on the webpage and the Skype video! 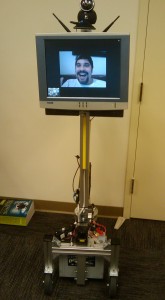 My friend found my reaction so funny that he took a photo of me that evening. As you can see from the picture to the right, I was insanely happy. Suddenly, I could be in California while I was in New York and I could move around the lab on my own volition! Granted, I could not touch anything, but the ability to see what people were doing from my own perspective rather than through the stationary monitor of the person I was talking to – this was incredibly freeing.

Isn’t this just Skype on a stick?

In a sense, yes. These early efforts are, certainly.

Remote presence systems (RPS) are often connected to the concept of telerobotics. However, remote presence differs in its focus on the richness of being present in the remote location rather than the ability to manipulate objects as a robotic surrogate might (e.g., complete with arms and grippers).

I often use this sample video from Willow Garage to demonstrate the concept of remote presence.

In comparison, mounted telepresence or videoconferencing (VC) systems are often perceived as bulky, static installations with large video screens and cameras. And while there has been a growth of desktop appliances to extend the videoconferencing experience beyond a static room, these more accessible solutions do not truly solve the shortcomings of VC systems, which I will go into in later sections.

Products like the Cisco Cuis, Apple’s FaceTime and qik’s video chat solution on the HTC Evo phone are examples of mobile telepresence where the camera of the pilot is moving – usually from a face-forward or face-upward position. A more appropriate synonym would be a “robot telepresence” which incorporates the concepts of remote control and telepresence.

So what is this collection of documents about?

For our discussion, a true remote presence systems are the ones that have been discussed in the IEEE Spectrum and NYTimes articles.

Please note: I am intentionally not discussing what I deem to be more surveillance-like systems like the WowWee Rovio or the iRobot Connectr which only support one-way video (participants can not see the pilot).  I will discuss current systems that have come to light since the articles mentioned above (like the MantaroBot, the GOSTAI Jazz, the Giraff and the RBOT 100), but if the system does not support effective pilot video to the participants, I would consider it a pre-RPS player.