Well – T-minus one day before the Mystery Robot is revealed – and I know that a couple of people are on pins-and-needles.

Yes – we did get a video of the MR in early April and no, it is not from Apple or iRobot (as far as Colin has confirmed). 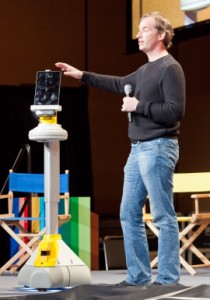 But today, Colin seems to have trumped the mystery company with a visit to google I/O in San Francisco to show off the AVA to a bunch of Android developers.

As quoted in this article from CNET:

“[Intermediate robotics] is the interesting one, with technology advances enabling robots to do things more like Rosie from the Jetsons,” Angle told thousands of developers assembled at Google’s show. “That’s where you all come in. The robot industry can’t be trusted to solve this problem. We need the mobile computing industry to come in and save our bacon through things like this.”

As from the conversation I had with Colin at InnoRobo, Colin speaks about how he wants AVA to be a development platform using the Android OS as the base. From today’s announcement, it seems as though iRobot is getting ready to roll out a “developer version” of AVA by the end of the year, and a “business” version by next year.

“Our goal is to get the installed base up, so you can get started writing apps for robots, so we can achieve this vision of robots doing things impactfully for us in our lifetimes,” says Angle.