Remote presence is obviously a close cousin to telepresence/VC – with the added benefit of mobility for the pilot. When I speak to pilots of RPSes, the sense of connection, freedom and intimacy is extremely powerful and rewarding in that the pilots feel more a part of the community they are in – simply in their ability to move around under their own power/command.

Summarizing the advantages of RPSes is quite simple:

And when combined with the top five benefits for corporates using telepresence today, the Aberdeen Group’s report on Telepresence and the Video Frontier lists:

And, as will be discussed later in this sequence of pages, there are numerous, citable examples of each of these benefits. With all of these advantages, it makes sense to use remote presence whenever possible.

Does RPS fit the marketplace?

In the past year, research the telepresence space has demonstrated that there are a number of challenges facing its growth, outside of large corporate customers who have and are able to make larger capital expenditures.

These requirements may not be as easy for smaller firms that do not have such disposable capital or staffing resources.

Recognizing this, some telepresence vendors provide a smaller videoconferencing appliance, which resides on the desk of the user at a lower price point. 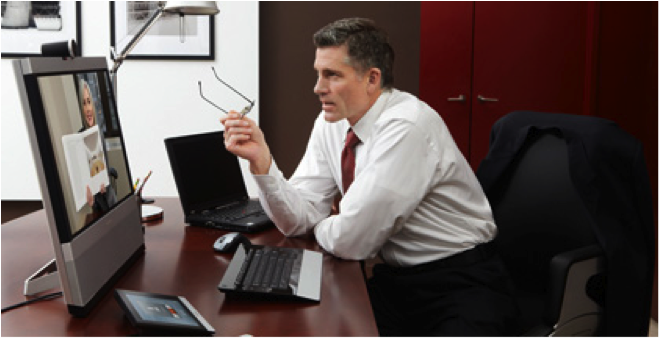 So - why is the laptop to the right?

While this photo is an idealized presentation, I challenge anyone to effectively work with this setup. I personally get quite annoyed having a large appliance on my desk that is not as frequently used as the smaller IBM laptop that is pushed to the side in this presentation.

Now consider a different option: remove the video conferencing client from this desk and have the RPS to standing in front of the desk – as a normal guest might. Now, the interaction becomes more natural, more engaging and far less contrived.

I would argue that RPSes are not substitutes for telepresence appliances; rather they are an augmentation to the concept of telepresence with a true mobility twist.

I’m concerned – isn’t getting an RPS in my office difficult?

Beyond the advantages discussed earlier, there are a number of reasons why RPSes might be a better first step into telepresence systems for small and medium sized businesses.

Almost all workplaces use wireless Internet, and the requirement for a dedicated line for the RPS is more than likely not necessary. The only required upgrades may be increasing office bandwidth and Wi-Fi routers to cover the range of the RPS. As current trends of increasing bandwidth in the workspace continue to show growth, corporate bandwidth should easily handle increased traffic loads.

In most VC situations, the remote viewer is placed in a specific location, unable to move from their position and having only a pan/tilt camera (and maybe zoom) to change their field of view. Since many interactions between coworkers are at person-to-person distance, such a vantage point is more of a detachment than an inclusion. RPS places the remote viewer in the same proximity as the other members of the conversation and, like the other members; he can change his point-of-view much more readily and realistically.

One of the benefits of increased CPU processing power on desktops and laptops is the ability to support improved video and audio processing. Instead of dedicated hardware that handles processing, most new processors and their associated graphics cards can easily handle the processing power needed for high-definition audio/video. Additionally, recent webcams (e.g., see the newest offerings from Logitech) boast improvements in resolution and light management while price points drop.

Total Cost of Ownership (TCO) is significantly less than only telepresence

While the highest priced RPS on the market today is rumored at over $60K per device, there are other offerings are in the $3K to $15K range. As quantities and manufacturing increase, the price of these systems will drop to the range of high-end computers, and the TCO of these systems will be on the order of managing a single PC. And since the video bandwidth requirements for an RPS are often half to two-thirds less per setup, more RPSes can exist in a space for the price of a single telepresence system.