As more words come into the lexicon, I will create simple definitions here for clarity. If you feel I am missing something in the definitions, please comment below and I will make changes.

Remote presence then would be the ability to have your state of being presence in a remote location. The challenge on this definition is what defines “presence” in a physical location – which is part of the work Pilot Presence is going to discuss. 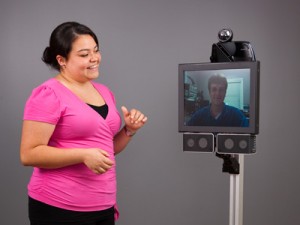 \ri-ˈmōt\ \ˈpre-zən(t)s\ \ˈsis-təm\ – Remote presence systems (RPS) are often connected to the concept of telerobotics. However, RPSes differ in focusing on the richness of being present in the remote location for the participants engaged with the pilot rather than the ability to manipulate objects as a robotic surrogate might (e.g., complete with arms and grippers).

\ˈte-lə-ˌpre-zən(t)s\ – From Wikipedia, the definition of telepresence is that “Telepresence refers to a set of technologies which allow a person to feel as if they were present, to give the appearance that they were present, or to have an effect, at a location other than their true location”.

With the branding efforts by Cisco, LifeSize, Tandberg and others – the common definition of telepresence has migrated the definition to signify videoconferencing tools.