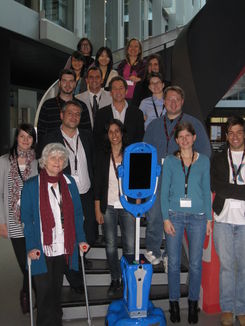 Gathered around the Giraff

In this session, three papers were presented. One, by Kate Tsui who we have mentioned before and listed in our Remote Presence Links yesterday closed off the session. The first two are ones I wanted to bring up today.

Effectiveness of RPS in Elder Care

The first paper called “Towards Evaluation of Social Robotic Telepresence based on Measures of Social Richness and Spatial Presence (pdf)” is a discussion on how the use of the Giraff RPS may or may not be effective in elder care. Of the three metrics that were tracked, experimentally they determined that:

As a user of over five RPSes and having many experiences working with them in a business situation, I can attest to each of these points personally.

The second paper is from Min Kyung Lee from Carnegie Mellon University and Leila Takayama from Willow Garage entitled “‘Now, I have a body’: Uses and social norms for mobile remote presence in the workplace” is a personal favorite. In this paper, the Willow Garage Texai is used as the Mobile Robotic Telepresence (MRP) or RPS in our lingo. Unfortunately, you have to download the entire proceedings to get it (UPDATE: the link for the individual one is NOW working).

To say this paper is meaty is an understatement. This paper is a rich treasure-trove of insights into the issues and futures of remote presence. Some of these insights include: 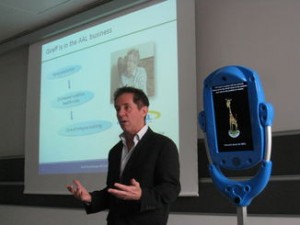 These and other insights are findable in the paper at the Workshop site. A definite engrossing read for the future of remote presence.

My biggest disappointment: wish I had gotten a chance to listen to Stephen von Rump discuss the designing of the Giraff.