Can we create a new term for telepresence robots? 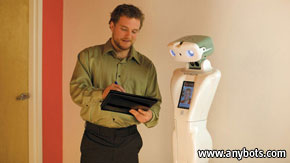 In the past year, I have spoken with a number of people on the concept of telepresence and telepresence robots – and had an real education on developing language to define a new product/market. Usually, we pay all sorts of smart, wordsmithers to come up with ideas and bring some thoughts to light – and then settle on a new term (or at least the CEO does).

In the past year, I have noted the following terms coming from the different players in the market:

Web traffic is telling me that all of the major players are reading this site and might be able to comment on the issue at hand.

We all know that “robot” as a term of description for these devices automatically create a cognitive challenge for people to understand what these devices are. We have no idea when we say the word “robot”, does the recipient hear Wall-E, The Terminator, Rosie, a Roomba or some other fictional character?

And since Cisco has essentially co-oped the term “telepresence” in all of their marketing efforts, using that term as a descriptive one is fine, but maybe not for the market space.

Jean-Christophe from GOSTAI discussed with me the issue that we need to address is the imagination of the users/buyers of these devices – giving them the sense that the delivery of these products is finally fulfilling the promise that science fiction has been talking about for years. He likes the idea of “teleportation” since the pilot is (in a way) teleported to another physical location while staying at the original location.

My concern is that, while a magical term – I think people will expect Star Trek teleporters and not the remote presence systems we have been building. And while “remote presence systems” has a very clinical ring to it (and InTouch has coined it first), I think it is a good term for the marketplace.

What do you think? What would be clearer for people to understand, yet capture their imagination? please comment below.