A year ago, InTouch Health and iRobot announced a partnership in terms of development and patent portfolio sharing. Yesterday, they announced the launch of their Remote Presence Virtual & Independent Telemedicine Assistant or RP-VITA. 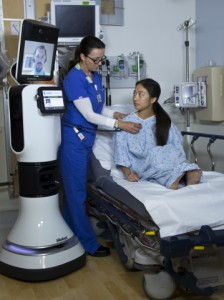 The RP-VITA is an excellent marriage of the two companies capabilities – iRobot provides the drive and navigation technology, InTouch Health provides the doctor interface and the experiences for the RP-VITA’s upper torso. As our prior coverage with InTouch Health’s CEO Dr. Yulin Wang showed, the headpiece of the RP-line of products is one fo the key components and distinctive attributes that makes the RP-line so successful. Components like: 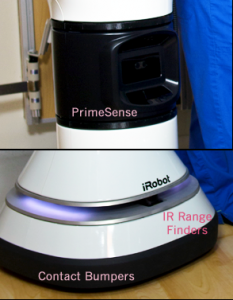 Based on the visuals and the video (shown below), it looks like iRobot provided some industrial design, the base mechanism which provides the sensors for auto-avoidance like the PrimeSense Sensors, IR detectors and Contact Bumpers as shown.

From our experiences with Willow Garage, the Autonomous Navigation feature (where a pilot/doctor can click on a map of the hospital and have the RP-VITA go directly there without the pilot navigating to the position) will rely heavily on the Obstacle Detection Obstacle Avoidance feature (ODOA) and will be the biggest benefit and potential sticking point for adoption of the RP-VITA. As mentioned in the IEEE article:

An additional capability for the RP-VITA incorporates autonomous navigation and is being submitted to the FDA for 510(k) clearance. This capability will allow a remote clinician or bedside nurse to send the RP-VITA to a target destination with a single click, enabling a number of breakthrough clinical applications. InTouch Health anticipates clearance for this feature in Q4 2012.

Normally, this autonomous feature would come with a particular heavy price since having the device take control of the navigation means that the responsibility if fully upon the shoulders of the manufacturer and not the pilot/doctor for any possible damages (e.g., running over a foot and breaking a bone). But with iRobot behind it, along with proper constraints (e.g., only on a single floor, keeping speeds to a constrained maximum), InTouch should be able to close the FDA 510(k) clearance. We will keep a look-out to see what happens at the end of 2012.

Thoughts on the RP-VITA

As shown on the video below, the RP-VITA is a beautiful marriage between InTouch’s focus on healthcare and iRobot’s strengths in robotic manufacturing and navigation. We await a chance to see this device in person to give you an upfront and close examination of this device. With a footprint that is smaller and easier to navigate than the RP-7, the RP-VITA may just be what the patients ordered.