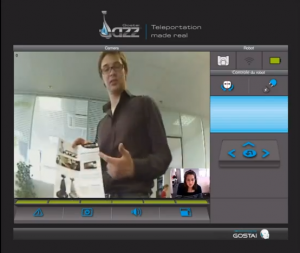 In January, we were given the chance to test out the GOSTAI Jazz system from New York in Paris and were slightly underwhelmed with the interface at the time. There were numerous bugs that needed to be worked out and Jean-Christophe (JC) said – wait six months and we will have another interface.

In March, at innorobo, JC showed off the new physical design of the Jazz and let me operate the system on the showroom floor. Again, I noted that the interface had not yet changed. He said “a few more months” suggesting the end of June.

Yesterday, JC sent me a lovely message on Skype which suggested I take a look at the new interface which he had posted on YouTube. And yes, I can say, the interface has certainly improved from the last time.


The salient points of the interface improvements are:

There are the standard on-screen controls (arrows) and keyboard controls for movement, but the head is primarily driven by the mouse interface.

I look forward to trying out the Jazz and seeing how it handles nowadays with all of these improvements. And with the lower-cost solutions coming to market, how will GOSTAI compete?

(h/t to JC Baillie at GOSTAI)