Last week, I got a chance to speak with Tim Root, CTO and Founder of VGo Communciations and to hear his team’s perspective on the idea of remote presence and where he saw the market evolving.

Tim is quite casual here in the conference room

During the course of the interview, I met with other members of his team including two engineers and the head of business development who gave me insights into how the sales are hopping at VGo.
In a later post, I will comment on the experience using the VGo in their office and the strengths and challenges it faces.
Please be aware, this is a two-page article. The next page is found here.

Technical note: the images in this article are somewhat pixelated due to the compression system I used converting from my XP machine to my Mac – I am working to find a better solution for the video for the demo post.

When Tim walked into the conference room, after I was all set up on the VGo, I was immediately surprised incorrectly assuming he would be the tall, carrot-topped guy from the photos I saw in other videos and pictures of the VGo. Instead, I met a very unassuming, engaging engineer who seems to have had a smoldering passion for the vision he saw happening.

Tim has been involved in video conferencing for many years – CTO of PictureTel, CTO of PolyCom – and has built a number of terrific video conferencing solutions for both companies. As he grew in his role, he began to spend more and more time with his customers – listening to their needs. As he listened, he began to consider that there was a simmering need to bring VC out of the conference room – and into other locations – where a remote controlled mobile VC system could help remote workers, remote managers, health care workers, etc. Thus began his vision of what has become the VGo.

In 2004, he left PolyCom and wanted to do some startups, and so joined a video security startup while mulling over this idea. Through a mutual acquaintance, Tim met Grinnell More, a self-trained engineer and co-founder of iRobot, and began to realize he had found a match. Tom Ryden, a sales and marketing director at iRobot was introduced into the mix. Tim had the communications technology side, Tom and Grinnell had the robotics – and then, they began to execute on their ideas.

An Application, not a Robot

When we began to speak about how the VGo came to be in its current form, Tim was very careful to discuss the vGo as an “application” instead of a robot. The rationale is that in order to enable an application (like remote presence), you really need to build a physical device to support the true concept of presence. By having a device that is freely moving and interacting with others under the power of the pilot elsewhere, the natural human response is to take the system as the person and establish its physical presence.

It doesn’t matter that the solution uses robotics. It could have been a mini-hovercraft or jet packs or hologram downloaded from a satellite. But in order to actually get something to market that was economical and practical – robotics was the best path. The combination of visual communication and robotics technology enables people to move off the screen mounted on a wall and out into the lab, the hallway, the classroom, the hospital patient room or pretty much anywhere.

The VGo was their actualization of an “active presence” system, carefully avoiding the use of the word robot.

As other friends of mine know, I am not a fan of the four-foot high RPSes – I have always believed that the device height could give pilots an uncomfortable feeling when engaging with others who were standing. The very act of bending down to speak to another person seems to suggest some social hierarchy when speaking down to the “head” of the device. Tim had some very strong supporting statements as to why this was not the major issue I have made it out to be, speaking quite eloquently that what drove the VGo form factor was a very simple concept. 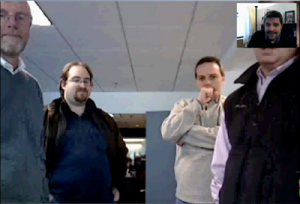 Am I at all self-conscious? Nah.

When the team started out, they built prototypes with varying designs – and saw that people used the system in all sorts of different ways and they would be interacting with people who were both standing and seated. The team recognized that the taller the system got – the heavier and more complex it got. In deciding on a height for their first product, they also factored in the recognition that people who were with the system, could be intimidated by its size and height – the bigger and taller, the higher the risk of accepting the culture shift of a remote presence device in their locations.

People tend to be at the same height when they are sitting, but everyone recognizes that there are short people and tall people and are used to varying heights when standing. The team learned that the remote person could better accept being shorter than the local person. Unlike roboticists, not everyone is comfortable with a device that’s moving around seemingly on its own. In keeping with their design goals of low cost, simple, light weight, small footprint and unintimidating – the result was the form factor you see today.

One area that Tim felt that the VGo excels at is the Industrial Design and User Experience aspect of the device as a whole – a great deal of time was spent on the ID and on the UI so as to make the solution something acceptable to all sorts of enterprises. Rather than a “battlebot with a screen” that might weigh on the order of 100+ lbs, the VGo was to be an elegant product which would look and feel light (17 lbs) which in turn would give the VGo a lot more flexibility to move around – both under its own power or by participant assistance.