Why the iRobot AVA is a “concept”, not a product…YET.

In the days after Colin introduced the AVA “concept robot” (as defined by Gerry Caron, director of product management for iRobot), the buzz on the AVA has been superb. Since announcement, the traffic on iRobot and the iRobot AVA has been phenomenal.

But, as reported by MSNBC, Caron states:

“We want to show people a vision of what they can have” at some point with a home robot that’s designed for several uses, Caron said. (Tell them, AVA: “No, I don’t do toilets.”)

And, while the features discussed are quite impressive (as I mention in this post on the AVA), I see some serious design concerns on the device as an effective “presence system”. In this post, let me discuss them further.

UPDATE (1/13): just found BotJunkie’s video on the AVA and a conversation with Mark from iRobot where he clearly states that the AVA is a “technology demonstrator” not a telepresence robot. The idea (from what I gather) is that AVA is showing what is possible from iRobot for discussion sake – and did not want to handicap discussions with constraints for telepresence.

In all of the videos I’ve seen of the AVA, she moves quite gracefully from one end of the pen to the other. 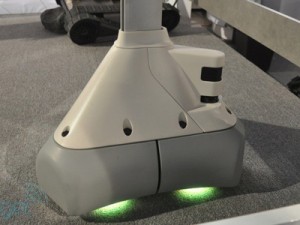 Ready for the LA Streets

And with its holonomic base (read: can move in any direction equally), she moves quite fluidly. But, my concern is with AVA’s omnidirectional wheels that are in the tripod base.

While omnidirectional wheels provide excellent movement, movement on non-flat surfaces (like a shag carpet) or any form of incline will be quite a challenge. And, as seen in the BotJunkie video below (about the 3:40 mark), the shaky nature of the mecanum-wheels as the AVA moves may cause pilot concerns as the cameras shake with the high-frequency of the wheels vibration.

Floor clearance is another concern (see the distance from the edge of the bottom bumper to the floor); for if there is anything in the way of the AVA, it may have difficulty moving over it.

While I was amused by the iPad showing off the Scoomba cleaning floors and other nice video snippets, I noted two major concerns.

iPad above the pilot's camera which results in overlooking the pilot

While I can not speak to how effective the SLAM/mapping system is with a low-cost LIDAR, sonar, two PrimeSense components that the AVA has, it will be interesting since, from the photos, it seems as though the LIDAR (laser scanner) is positioned at the floor (see the dark components at the front of the AVA base).

One problem with the placement at that point is that you either get a straight-line measurement (of objects in the way) at a particular height. With the combination of the AVA sensor package, I will be quite interested in seeing how things work out for the AVA in creating an effective user experience for the AVA pilot.

Since the AVA is a “concept” robot, I could complain about the sound system (e.g., using the iPad’s anemic speakers) or no perceptible microphones should not be big issues to complain about. Additionally, as a pilot, I am not sure I would want other people changing my physical height by just a touch of a bumper. But, as I said, AVA is a “concept” robot technology demonstration, not a product yet.

See the video below (from BotJunkie) for more information:

Actually, I love a number of things from the AVA. My favorites are:

So – what I take from iRobot’s entry into the space is:

UPDATE: in listening to the BotJunkie video, I must give credit iRobot with the fact that they wanted to use the AVA as a jumping off point for ideas. I truly understand how, when discussing robotic applications with individuals, it is not as easy as drawing wireframes for websites to visualize what is possible.

[Image Credits: all from Engadget article: iRobot AVA Chills With Us at CES]