Discussing Use Cases for Remote Presence 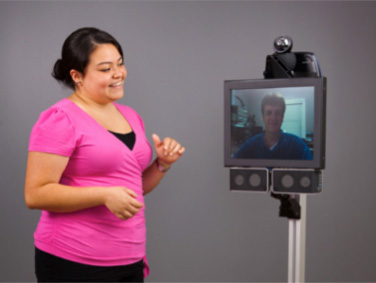 This week, researchers from the University of Massachusetts Lowell (Katherine M. Tsui, Munjal Desai, and Holly A. Yanco) pre-published their findings on use cases of remote presence / telepresence robots in prep for the HRI 2011 conference in Switzerland this March. In their article, they bring up a number of issues that are relevant to the future of remote presence, that are worth reading about.

The research setting was at the Google campus in Mountain View, California. The team was investigating the particular use cases that RPS would work most effectively in – in particular in meetings and in hallways/walking with. While the experiments were relatively short and has some interesting dimensions (e.g. users deciding not to return to using the RPS if they did not like it), I believe many of the teams observations were dead-on – which I summarize below:

Likely best use case: hub-spoke configuration where one person (the spoke) is interacting with the group from a remote location (hub). Usually, when the spoke has already been with the team physically beforehand, the configuration brings about greater pilot satisfaction because members of the group recognize them (being physically present).

Best added value: before and after meetings. As expected in other cases (like the HP BiReality effort), the social need for before and after conversation was greatly improved with the RPS since now the pilot could be present during the gathering time and follow someone out of the room if they wanted to continue the conversation much later.

This article is the first I have seen that goes into these issues to some degree – and I recommend that if you are building these systems to investigate the team’s insights.