Undeniably, the double is the best looking device on the market today and, with its sleek, clean industrial design, it shows exactly what it is – a simple movable base for an iPad for video.  When using the double, everyone – men, women, children, dogs – are naturally curious and begin to engage with the pilot in the double in a rather friendly manner.

Unlike the Beam Pro, with its relatively large stance and harder lines, the double seems to engender a feeling of “cute” or “awwww” after the initial shock of seeing self-propelling device is overcome.  And the telescoping neck seems to make people smile, possibly reminding locals of the experience with E.T., when moving from sitting to standing mode.

In forward and reverse movements, the double more accurately emulates a human action which helps in the anthropomorphizing of the device.  By shifting its weight (due to the inverted pendulum aspect) and ramping up the acceleration curve in a slower, more gentle manner than other devices, the double seems to offer some of the non-verbals locals are looking for.

Excellent for both sitting and standing

Unlike the Beam Pro, the double offers an position adjustable neck which allows the pilot to either stand up to a height of 60″ or squat down to a smaller position of 47″.  This variability worked incredibly well in face-to-face conversations since we could adjust our height as any other person might by sitting or standing.

A recent upgrade seems to have removed the midpoint height positions (in-between the two extremes), but we look forward to having those controls returned.

Unlike the Beam Pro or the Ava 500, the double is an extremely light-weight 15 pound device with an almost built-in carry handle (the neck).  We have taken the double on the bus, in a taxi and just around the corner with the ease and simplicity of carrying a sack of groceries.

Navigation interface easy to use / has focus on the remote location

Since the majority of the double’s interface is the video that is being sent back and forth between the pilot and the double, all of the other elements melt away – placing the personal video in the upper right of the screen and hiding the majority of the navigation elements unless necessary.  On both the iPad and the Chrome extension, navigation and engagement from the forward facing camera is as an immersive experience as one can get. 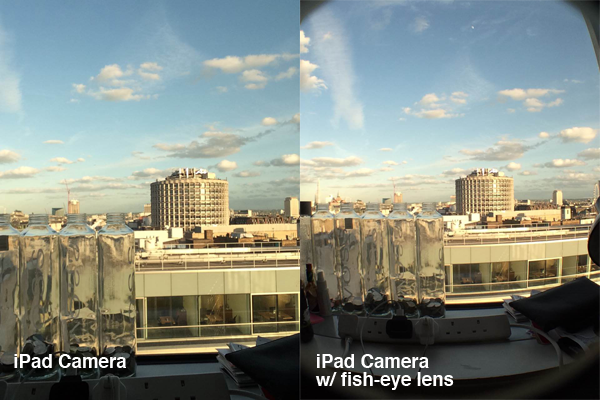 In our original testing cycle, we discovered we had the original headpiece of the double – which did not support the fish-eye lens mount on the double.  Since then, we have received the new head and we agree that the fish-eye lens is a marked improvement over the standard view provided by the iPad front-facing camera.
Continue reading the Cons »