Did Unbounded Robotics release the White Horse of the Apocalypse? 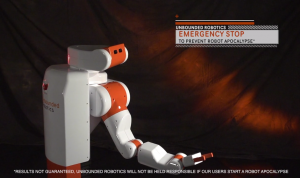 Then I saw when the Lamb broke one of the seven seals, and I heard one of the four living creatures saying as with a voice of thunder, “Come.”

So last night, Unbounded Robotics finally released their product, for the upcoming RoboBusiness Conference tomorrow (did you get yourself a Beam?).

While the title is provocative, the joy of seeing what we remember fondly as the PR3 is nice to see come to life. Melonee and her team from Unbounded have devised a beautiful alternative to the $400K system (which, in our estimation cost on the order of $200K+ to build) to a $35K device out of the box. Simple, easy to use if you are a frequent ROS user, and a system that has many similarities to the original PR2.

Known as the UBR-1 (we assume that means Unbounded Robotics Robot version 1), it has the same form factors as the PR2, similar ability to add an end-effector on the end of the current 7 DOF arm but has shed the multitdue of cameras and sensors that festooned the PR2 along the armature.

And, combined with a lighter frame (we are guessing) a ten hour battery life is assured.

And, since they live in Silicon Valley, why not borrow from their friends in Cupertino and come up with a UBR-1 and a UBR-1S where the 1S version has more RAM, better processor (i7 versus an i5) and a bigger hard drive.

It is nice to see that the legacy of Keenan and Eric and the rest of the PR2 team continues with these guys. Way to go – and way to make your dreams happen.