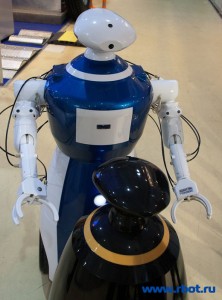 R.BOT showing some love to its small friend

As my friends at Plastic Pals report, there has been another player in the telepresence robot market for a couple of years – based in Moscow, Russia. The R.BOT 100 is a creation of 3D Detection Labs (3D Labs), a firm based in Moscow, founded by graduates, faculty and graduate students from a number of Russian engineering schools including the Moscow State Technological University (MSTU), Moscow Power Engineering Institute (MPEI), Moscow Institute of Physics and Technology (MIPT) and others.

As early as 2007, 3D Labs have been developing telepresence-like devices which include a “Robocop” called the P-BOT 001 which cost on the order of $10K and a high-altitude blimp/detection system called the OKO-1.  The R.BOT 100 was the natural outgrowth of the P-BOT 001 which (if you have the google translate set to Russian) has the following specifications: 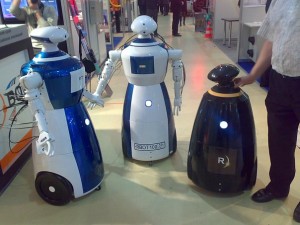 Are you ready for the convention crowd?

For approximately $3000 (as per Plastic Pals), one could purchase the R.BOT 100 – a much more accessible price than the products discussed in the market today.  To provide video presence for the pilot, the R.BOT 100 is fitted with a small (9″) LCD screen on the front of the system.

The R.BOT 100 is both used for security, remote presence and promotion – quite similar propositions to the GOSTAI Jazz.

For the past year, R.BOT and 3D Labs have been showing off the versatility of their system in various videos and news reports focusing on remote medicine,  librarian usage (they are called Chuck and Huck by the children in the two libraries) and even in a Moscow school by a boy suffering from Leukemia to connect with his classmates (sound familiar?). 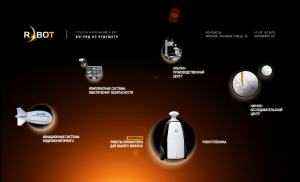 As I examined the R.BOT site, I found a Flash portal that suggested the company 3D Labs has built an ecosystem around the development of consumer robotics.   Aside from the different offerings for the R.BOT 100 (promo.rbot.ru and rbot100.rbot.ru), there were listings for other supporting companies such as:

and a number of other technology companies that were part of the 3D Labs organization – all in support of the ecosystem.

It seems as though, like GOSTAI has found in Paris or Willow Garage in Menlo Park, R.BOT is in an industrial ecosystem benefitting from the synergy that comes from having these companies in the same physical location.

Combined with government support (through antiterrorism funding) and the talent coming from the local technical schools, R.BOT was able to design, develop and manufacture the R.BOT 100 quick quickly.  To see their progress, watch this video from February 2010 showing the designers and developers working on their first prototype (only the first two minutes of the video from Crazy Business):

So – what does this mean?

To me, I see that the concept of telepresence robots / remote presence systems is not new – and places other than the US are showing other ways of attacking this puzzle.  With the proliferation of wifi, broadband and sharing of technical knowledge, I believe that there are other companies in the world working on this problem.

I look forward to seeing what R.BOT comes out with next – though I might suggest that the R.BOT 100 lay off the vodka for a while, it might do better with fewer pounds. <insert laugh line here>

I learned about R.BOT last week, and have been gathering all sorts of great material. Sometimes, I find some great stuff that I could not add to the article – so let me include them in this addendum.

[credits: videos from Mikhael Mikhailovich in Moscow; photos from R.BOT and Wikipedia.ru; h/t to Plastic Pals]