Last Thursday, Orange France announced a new product offering, the Ub-y (evoking the word ubiquity), is essentially a rebranded Beam+ from Suitable Technologies. On Friday, we caught up with Laurent Marchou, Director of Open Innovation with focus on Robotics and IoT (Internet of Things) for Orange France.

While the announcement of the Beam+ is over nine months old (from the 2014 CES Show), an agreement with a major telecoms operator like Orange in a major market is quite a change in perception of the viability of the concept of remote presence.

Aside from the ability to purchase a double via the Apple Store online, there have been very few major sales channels that have taken on the risk of distributing telepresence devices. But, as Laurent described, the core functionality of the Beam (and remote presence altogether) combined with the use cases they see – all are making it obvious as part of the natural evolution of communication. 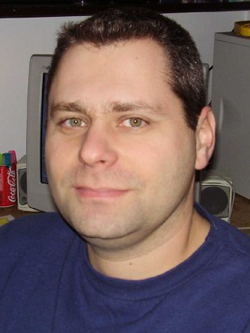 When Awabot brought the BeamPro and the Beam+ to the attention of Laurent and Orange, the Innovation Group immediately understood the concept of the devices. While Orange’s core competency is telecoms, they have always been part of innovation even back when digital cinema was simply a gleam in Francis Ford Coppola’s eye. Rather than building such a device with the Suitable partnership, the Ub-y comes to the customer sooner without the hardware ramp-up Orange may have had to ensure.

But what really sold it to Orange France were the incredibly positive reactions from focus groups on the use of the Beams in both professional and home situations.

“It’s not about the technology, its about the experience of replicating a person in the remote location – people want to communicate, not worry about the technology. Via the Ub-y, you can emote much more than you could via a screen, tablet or any other teleconferencing product.” said Laurent.

“The evolution from sitting in front of a TV screen having a video call to having a person move around while engaging properly, you can see the emotion and the true interpersonal interaction that comes from using these devices.”

“It is about improving communication, not just with video but emotion and physical presence – something that video conferencing can not create.”

Laurent believes that the two main opportunities/user cases are going to be 1) in the home with the Ub-y (Beam+) where families will be able to interact more effectively by “being there” – and allowing the “kilometers” to disappear – and 2) in the professional setting where companies will have Ub-ys (BeamPros) available for easy access – as easy as using Skype to connect with others.

The addition of the Ub-y to the product line of Orange is very much in line with Orange’s core offerings – promoting the power and security of the Orange network around the world. Plans include the embedding of an Orange 4G dongle within the Ub-y to both support wifi and Orange’s mobile network. And, for the security and privacy conscious, Orange is focusing on offering assured privacy of the connection between pilots and their Ub-y on the Orange network.

As for when it will be available, the only thing Laurent would commit to was “2015” – whether that is January 2015 or Q1 2015 is up to the distribution partners and the provider (Suitable). But when launched, it will be showcased in Orange flagship stores throughout France. In addition, Orange is working with their European partners to have the Ub-y available in their locations some time in 2015.